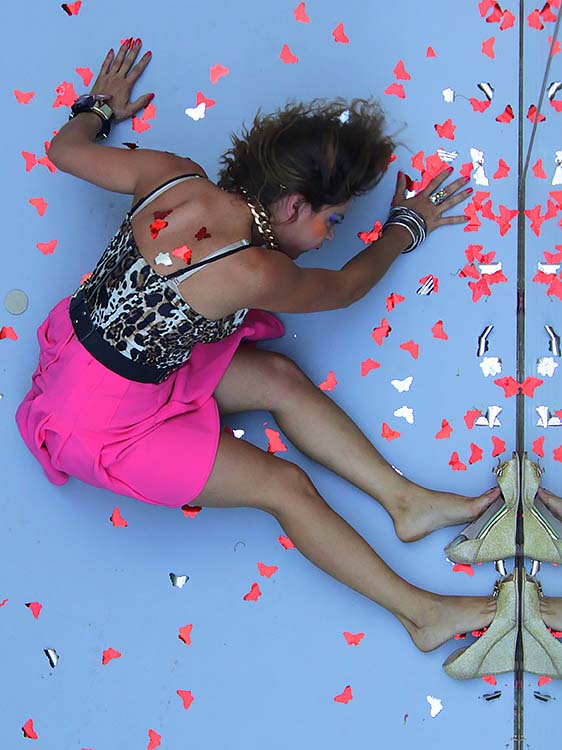 Moving on the diminishing borderline between visual art and performance, Clipa Theater’s site specific project Forever/Never, offers a passage through deceiving images of beauty and violence.

Forever/Never​ ​stages short scenes of representations of violence, meticulously designed to be both disturbing and shockingly beautiful and operated in an endless loop. It allows the spectator to choose the duration of his observation of the scene before moving on to the next ‘tableau vivant’. The performers accurately repeat extremely physical moments, over and over again, letting their physical exhaustion corrupt and change the material presented, until they can no longer do it.

Forever/Never was originally commissioned by Israel Festival for the Israel Museum in Jerusalem. The dialogues with the space’s striking architectural features and the artworks in it are at the base of this creation. The audience’s natural tendency to keep moving onward in the corridor, being pulled towards the ‘light at the end of the tunnel’ is constantly contradicted by the circular action, which seems to go on forever, seducing the spectator to never leave the circle of representations of violence.  The passage through the choreographed repetitive scenes is finally completed with a contradicting feeling of sensual pleasure and repulsion.

Forever/Never​ ​harnesses the audience towards actual threat and fear, and moreover, search to reveal what instinctively attracts us to watch these acts of violence. Whether it is watching a car accident or street fight, the aftermath of a terrorist attack or even emotional suffering. Does it reaffirm our own survival, make us feel more alive?

Forever/Never has been adapted to Tel Aviv Museum of Art and presented at many festivals, theaters, museums and public spaces abroad.

“The closed corridor featuring Rodin, was a complete contrast to the blunt violence. Their meticulous choreography created a confrontation of disgust and beauty, between being tempted to remain a viewer and the natural need to intervene and stop the violence. All of the scenes repeat in a loop, and they fit together with awe-inspiring accuracy. A creation directed with great care and performed admirably” – Michael Handelzalts, Haaretz

“The creation uses this unique space to built a smart analogy about the way that the living, yearning, suffering body becomes a silent piece of art. This performance has an ironic message about plastic art, and about its creators’ perverse desire to find the sublime beauty in the moments of greatest passion and human suffering” – Shai Bar Yaakov, Yedioth Aharonot